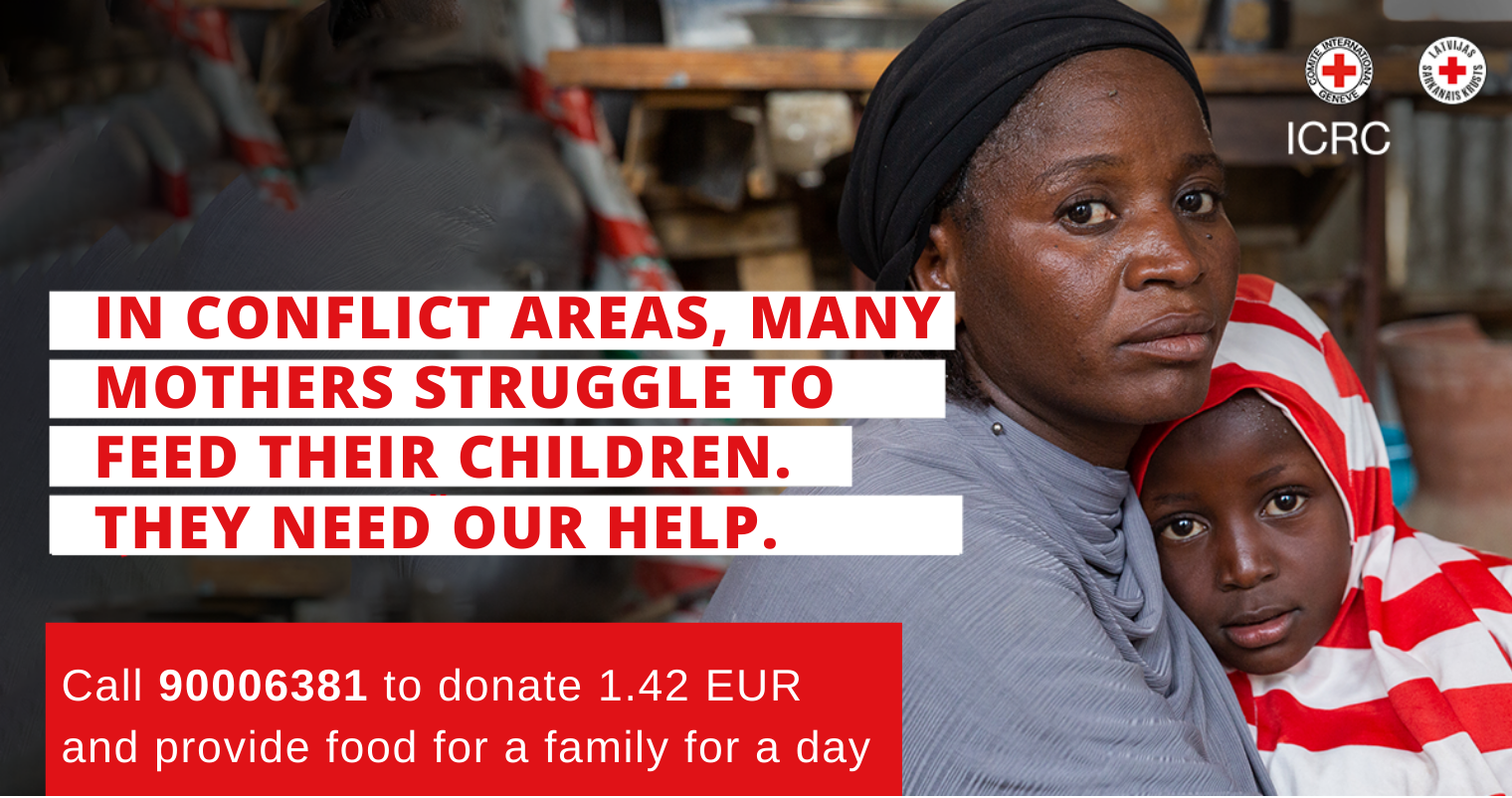 On the occasion of Mother’s Day, the International Committee of the Red Cross (ICRC) and partners in the International Red Cross and Red Crescent Movement, including the Latvian Red Cross, are launching a new campaign to highlight the courage of women living in countries in conflict as they face and overcome immense challenges.

Women face enormous risks in war: sexual violence, displacement, and difficulties finding food, shelter, health care and education for themselves and their children. They may be found queuing for food parcels or clearing debris from their shelters in transit camps. Many play a proactive role post-conflict in peace building and social reconstruction. In a study entitled “Women and War” published twenty years ago, the ICRC looked at the risks women face and the important role they play during and after crises. Two decades later, these risks and responsibilities haven’t changed and the stories they share with ICRC teams are made of the same concerns and struggles.

“It’s important to recognize how hard women in countries in conflict try to maintain family life, to provide food and education for their children. Funds from this new campaign will help us ease the burden by supporting women and families in need.”

said Daniel Littlejohn-Carrillo, Head of Resource Mobilization at the ICRC.

In northeast Nigeria, eighty percent of people forced to flee their homes due to conflict are children and women. Aisha Idrisa Jawa is one of them. After her husband was killed by armed men, she had to raise her children alone in a camp for displaced persons.

Aisha lives with her two youngest daughters for whom she can’t help but worry.

“What worries me is the future of my children, especially my daughters… If I weren’t with them, what would their lives look like?”

There is much to be concerned about in northeast Nigeria, where the number of people in need of emergency humanitarian assistance has jumped from 7.9 million in early 2020 to more than 10.6 million since the COVID-19 outbreak. The Red Cross supports Aisha and many other mothers in war-torn countries, women whose determination, courage and self-sacrifice carry the hope of future generations.

This new initiative, the One Campaign, is being carried out by the ICRC, which helps families in conflict zones, and invited partners of the International Red Cross and Red Crescent Movement. In response to the call, in May 2021 the Latvian Red Cross is implementing a charity campaign that includes planning financial donations for mothers with their children affected by armed conflict, providing them with much-needed food parcels. The national societies of the Red Cross of Austria, Sweden, Costa Rica, the United States, Iceland, Brazil, Switzerland, Finland and Norway have also taken part in the campaign.

In order to support mothers with children, please call 90006381 to donate EUR 1.42. With one call you will provide food for a family for a day.

It is also possible to donate by bank transfer, indicating “ICRC, food for families” in the purpose of payment:

Thank you for your support! Together we can help!