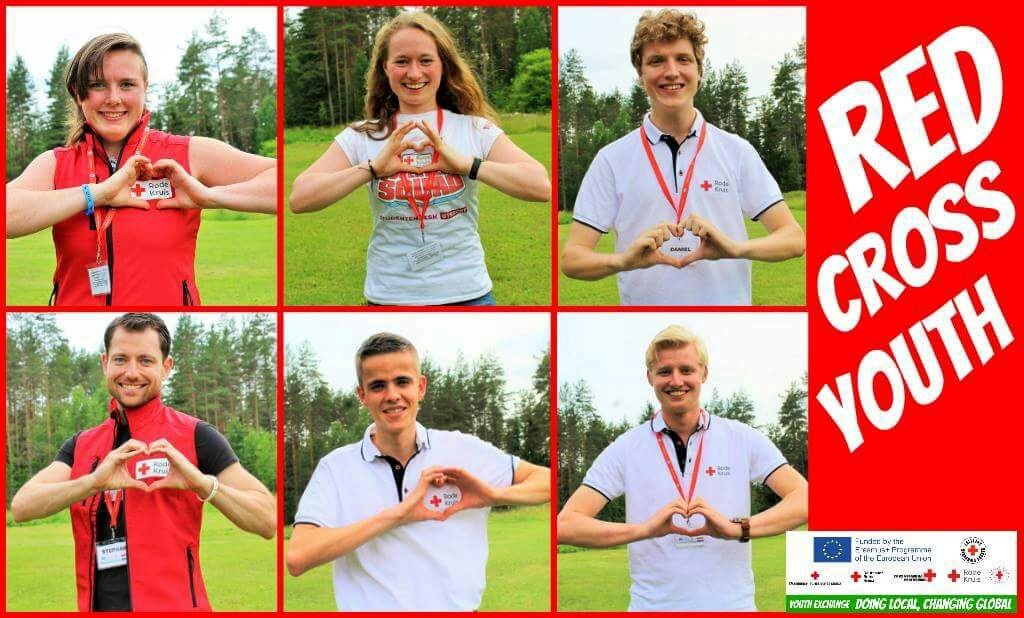 We are happy to receive a feedback from one of the participants of the Youth Exchange “Doing local, changing global”. Feel free to enjoy it! Written by Daniel Podzimek, Youth Ambassador, Netherlands Red Cross

“The Red Cross Youth Exchange, that was organized by the Latvian Red Cross (LatRC) and  funded by the Erasmus+ program of the European Union, entails a program in Latvia in which six different countries participate.  It was the first time that the LatRC organized such an international exchange. It was also co-financed by the LatRC.

Six Red Cross members from each country (Austria, Germany, Estonia, Portugal, Latvia and the Netherlands) were present. There was a great variety in fields of expertise among the volunteers and the staff members. Volunteers and staff members with experience in the fields of first aid, health care, volunteer work with youth, refugees, elderly and (young) prisoners were all part of the international team.

The name of the project is “Doing Local, Changing Global”. The project thus consisted of a wonderful combination between local volunteer work in Latvia (such as in an elderly home and several youth camps for children) and formal presentations about the national approach to several topics, as the title suggests. On the last day of the exchange we also came up with a Red Cross Social Media Campaign that will hopefully have a global impact as well.

A so-called “Advanced Planning” took place in Riga in June, before the actual exchange started. The goal of the “Advanced Planning” was to make sure that all details about the schedule and the excursions were arranged for the Youth Exchange that took place from 2nd-12th of July in the Smiltene region, Latvia. Two delegates from each of the six different countries mentioned above came together during the planning phase (7- 10th of June) in Riga. Arthur Bredemeijer (National Advisor Youth) and Daniel Podzimek (Volunteer) on behalf of the Netherlands Red Cross. The volunteers and staff members met the Secretary General of the Latvian Red Cross (LatRC), Mr. Likops, during a visit to the RC headquarters in Riga. The main goals of the project were discussed, as well as the future aspirations. It was also a great opportunity to learn more about the LatRC and their impressive and extensive list of projects, both from a practical and a historical perspective. Several team-building exercises were incorporated in the program as well so that the youth leaders could get to know each other better before the start of the exchange. After the detailed agenda was discussed and several ideas about the program were exchanged there was plenty of time to visit the short-stay and crisis center “Burtnieks” in Riga, where multiple families can stay during times where it is needed most. It was very inspiring to see the local  volunteers share their stories.

All in all, both the advanced planning and the actual youth exchange were a great success. I was already aware of the so-called ‘eenheid’ (roughly translated as ‘unity’) among the Red Cross volunteers in the Netherlands. I could listen endlessly to all wonderful stories told by our volunteers, based on the core principles they all share. It was thus very inspiring to see that those principles were just as lively among our international colleagues. The Red Cross was really that what connected us, volunteers from all over Europe, from day one onwards. While we spoke different languages and came from different cultural backgrounds, we shared a passion we could speak openly about, while exchanging  inspiring and practical ideas about our work for the Red Cross. Events like these made each of us realize how proud we all are to be part of “The Red Cross family” (we came up with this term during the exchange, actually). It, eventually, showed us all how much all our volunteers  have in common, striving for shared principles and goals , both on a national and international scale.“

Picture 1: The Dutch team planted a tree (together with all other countries) at the elderly care facility in order to protect the elderly against the wind when they meet outside.

Picture 2: The team is involved in an international Social Media campaign promoting the Red Cross Youth

Thank you, Daniel, for your kind words! It was our pleasure to welcome you and all the other participants in Latvia! Looking forward to hear about your youth volunteering activities in the future!

The Youth exchange “Doing local, changing global” was organized by the Latvian Red Cross within the program “Erasmus+: Youth in Action”, it is funded by European Commission with Latvian Red Cross co-financing. 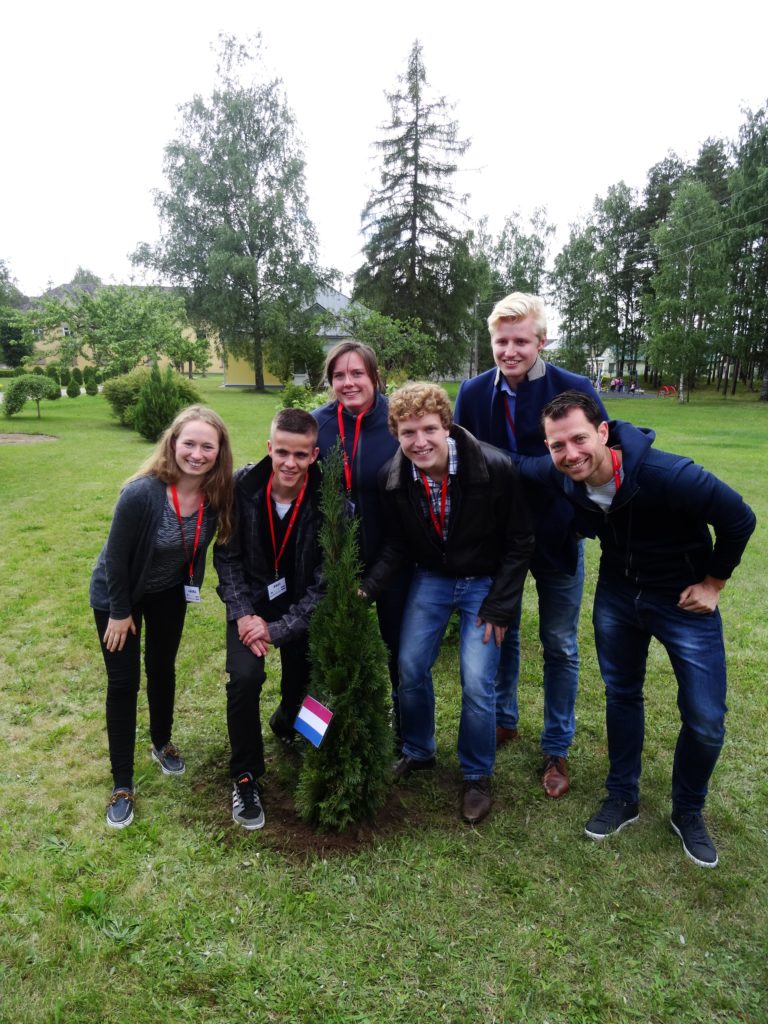 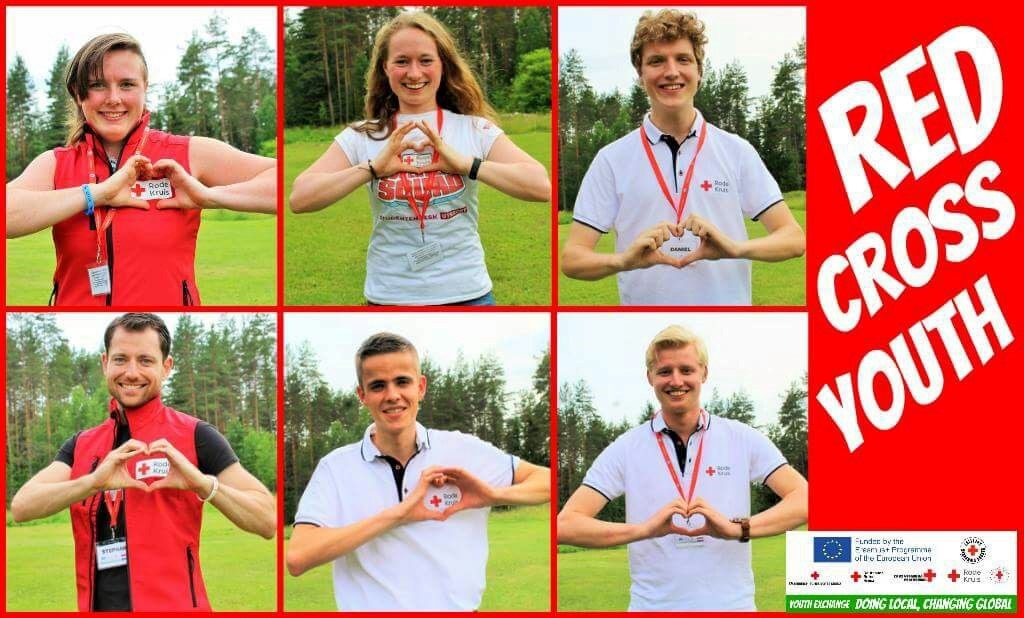